Get a Price or Ask a question

Our goal is to be The Best Drywall Repair Service around! 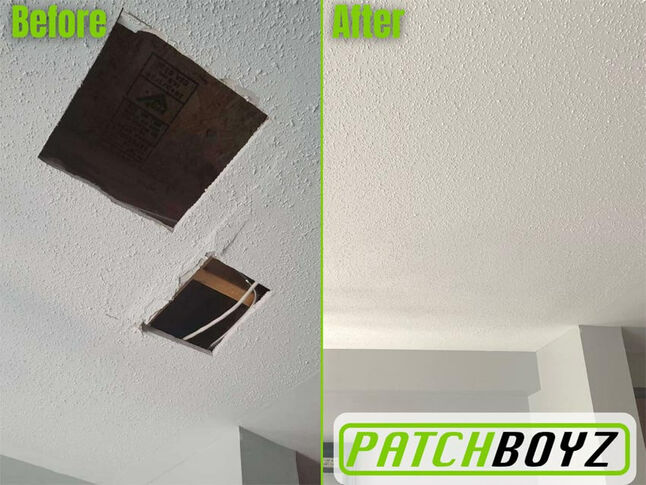 Many think that once you damage a stipple ceiling, it is done for and cannot be matched. Now, depending on your skillset, that may be true, but with the right skillset, anything is possible. PatchBoyz has been repairing stipple ceilings for its customer for years. Many home-owners and contractors use us to execute these repairs. It's not only because we have a lot of experience at it but because the manner in which we communicate with our clients. We are quick to respond, provide quotes quickly and let you know when we're on the way to the job.

PatchBoyz plans its days out carefully and is rarely late. If the occasion does arise where we will be a tad tardy, we will send you a text message so you're not worried. We know our clients are busy and don't want to waste time waiting around for a trade, wondering if they will show up.

Stipple ceilings and Popcorn ceilings, while similar are not the same. If you wish to know more, we've written an article about it here

Our customers
say it best

and we love them for it.

"Patch Boyz did an excellent job covering up holes in my drywall following electrical work. The team is very professional and they left my home clean, no drywall dust. Once the holes were fixed they matched the paint and now you can't even tell any work was done. Excellent craftsmanship."

I've hired Jud on two occasions to patch holes in our drywall left by a plumber. He is always very responsive and in both cases completed the work within 24hrs of reaching out. He is super pleasant to deal with and his work is excellent. I highly recommend!

"We were extremely pleased with Jud's planning and execution of a difficult project in our condo. He accepted the challenge of removing a bulky AC unit and expertly rebuilt the wall, so you would never know the unit had ever been there! Jud was committed to delivering professional work with easy communication, and we would recommend him for any drywall project." 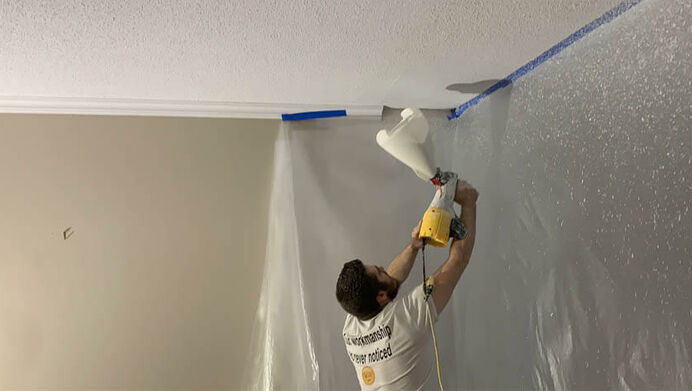 Stipple, Popcorn, Stucco, textured, cottage cheese. Which is the right term or that bumpy ceiling? While these are all commonly used terms, the correct term is Stipple which falls into the category of “Textured” ceiling.

Stipple ceilings were installed for decades prior to the 2000s and still in many homes continue to be installed. Stipple ceilings sprays hide imperfections in the drywall which are often difficult and costly to hide for builders. Especially when it comes to a ceiling near a window that lets the light in. The way the light shines in during different times of the day will show imperfections in the drywall. In order to prevent these imperfection, one would be required to either skim coat the entire ceiling or monitor their work for a full 24 hours after it has cured as well as take into account any potential reflective surfaces that may present themselves inside and outside the home. A good example of such a surface would be a car parked in front of a large window. While the plastering, or mudding job, as it is commonly known, may be fine at first glance, this same ceiling may show its imperfections when the sun reflects of the roof of your car, into your living room. This scenario would lead to “call-backs” to the builder with the aim of having them repair the “defective” or “sub-par” work. You can see how expensive this could all become for the builder.

So instead he/she chooses to spray an easily applied textured ceiling with acoustical properties. While it may not be as nice as a flat ceiling, which is now more commonly associated with a high end home, it definitely saved the builder money, especially in many homes where it was decided that only one coat of mud would be applied to the ceiling and no sanding was needed, simply spraying stipple with a paint gun. While this is a much easier process, it does require preparation. All walls and floors must be covered to catch the over-spray, and trust us – there is overspray.

As cities grow and homes previously considered to be on the outskirts make their way into what is not considered the inner city, property values go up and people start doing renovations and overhauls. What was previously considered to be an entry level home is now an expensive home in a sought after location which warrants a touch of elegance to then raise the value of that home even higher. While some people don’t mind stipple ceilings and will pay to have the Ottawa stipple ceiling repaired when an electrician, plumber or HVAC technician comes through and makes holes, others will take this opportunity to have an Ottawa stipple removal company such as PatchBoyz come in and finally take care of it once and for good.

Stipple or popcorn ceiling removal is no simple process and is rather a partnership between contractor and home-owners. The contractor requires the home-owners to do several things. First off, it is legally required that a lab test be done on the stipple to see whether it contains asbestos or not before the company allows the particles to become airborne, the next is to have a moving company move all the furniture out of the work area. Home owners often select the garage or a pod as a temporary location to store all the furniture. The Contractor then covers walls and ceilings in plastic to prevents asbestos particles from spreading as well as wet mud from flying onto undesired areas.

While textured ceilings are often removed, many people don’t mind it at all and rather enjoy having a contrast from smooth to textured in different parts of the home. Of course certain areas such as kitchens and bathrooms are more ideal for a smooth finish as this makes them easier to wipe down. Especially when one cooks with a lot of oils, nearby stipple ceilings can become a nightmare to clean and pretty much impossible.

PatchBoyz was recently contacted to patch the walls and ceilings of a new open concept redesign. Where there was formerly a wall separating a kitchen living and dining room areas, they’ve now removed the wall. While patching the walls was easy and the usual task, the ceiling had multiple requirements as one side was stipple and the other was flat. The process to fix this was of course to finish with 3 coats of mud, sand and prime. Once dry, a chalk line had to be marked from one wall to the next. Painters tape was then mounted to the line and plastic hung to the floor. We were then able to spray stipple on half the patch and not the other. Leaving a clear cut transition from stipple living room to flat dining room and kitchen. Patching the floor and adding wall trim was then left to the general contractor to fulfill. Our duties were done.

PatchBoyz has developed relationships with many local contractors which seek out its expertise in these matters. While anybody “could” mud with the right amount of practice, the amount of experience required to leave a perfect finish is daunting. For those with experience plastering / mudding, it is accepted that mudding is more of an art than a trade as there is more than just facts and science to it such as using a nail and a hammer. Thousands of repetitions of the same movement are required for fluidity and favourable outcome. The most common thing we hear is “I hate mudding. I hate it almost as much as sanding”. It is a source of much frustration for contractors and while most other trades are simple enough once you’ve learned the technical aspect, this one requires much practice even for the most mediocre outcome.

If you're in need of a stipple ceiling repair due to water damage, see this article for what steps to take next after water damage

If you have an upcoming stipple removal job and you’re looking for a stipple removal contractor in Ottawa to take on your project, we’d be more than happy to discuss your project with you and see if we’re a good fit. We promise you won’t experience the same level of customer service anywhere else. We hope you’ve enjoyed this article.

Speak to a REAL person!

Need help? Get in touch with us.

We like chatting, we like problem solving, but most of all we like providing value. If we're not the right solution, we'll do our best to point you in the right direction.

We're proudly Servicing all of Ottawa and the Valley including: